This writing is one of the selected essays done by undergraduate students of “Consumer Analysis” from University of Indonesia, the faculty of social and political sciences, communication program of advertising international class 2013.

Inspired by the same spirit, Kediri Bertutur takes the undergraduate students on their own cultural journeys. Kediri Bertutur presents Sharfina Indrayadi’s personal writing after taking the journey to Jogja in November 2014.

Culture Epiphany during The Central Java Wandering
By Sharfina Indrayadi

Earlier before, it has never come to my mind how preserving our traditions and culture is such a huge deal. If I could be more specific, I believe most of people had known the great amount of importance on preserving our cultures but it won’t hit them that hard if they did not experience the extinction of our cultures itself and how mind blown it is without having actual interaction with the culture and the people who does that. A fortune comes in my way when I had a chance to explore and merge with the people who happen to still doing it. In a short time span of the trip, not just learning and knowledge experiences each people had given me, but I also got the life lesson within each traditions, arts, and culture that is extremely divine and possibly life changing.

This experience got me a flashback to the last time I went to Yogyakarta that is approximately three or four years ago.  Back then, it was a pretty laid back seven-days trip to do with my junior high school friends, and almost nothing more in Yogyakarta is special than just hanging and spending time with my friends enjoying the city. I found that it is very unfortunate of me to not explore more about this city as I realize now that this city has more than just its urban life and sweltering weather. Back then, I’ve got very low exposure with the cultures and arts within and surround this area.

Few weeks ago was another shot for me to explore more about Central Java––the arts, traditions, and culture. I had a chance to visit three cities, which are Jogjakarta, Magelang, and Solo. At the end of the trip, I end up learning plenty life experience as I interact with the people I had encountered.

Solo, Jawa Tengah was the first destination. Here we encountered a unique music group who play percussion as their signature. It is very uncommon and sounds a bit dull at first time knowing that all of them are famous only by playing percussion or drums set or any type of traditional drums. I imagine how soundless and non-melodically the music would be if percussion is placed as the main instrument in making music. But turns out, it was splendid. Seeing the group playing the music is incredible. Looking at how they performed was beyond amused and surprised than ever. Those talented men happen to combine traditional/ethnic music with several other music genres that is quite familiar among us. Be it Pop, Jazz, Rock, Classic, Hip Hop, or Blues. They combined it all and impressively produce an outstanding and unusual music. 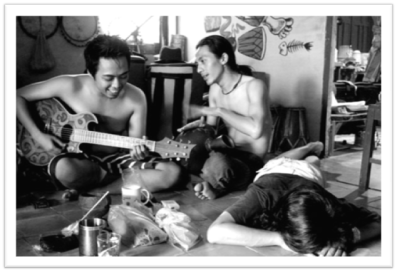 Watching their performance live and had a chance to listen a brief of their music samples earlier got me a feeling where I find how proud I am to have such people with great talent and outstanding taste of music without forgetting their roots culture in this country. During our conversation, I could see how low profile they were. They express themselves to the music wholeheartedly. It seems like fame and money were not the main purposes in playing music. This attitude taught me to keep myself as low profile as them. We can see how sincere they play music because it is something that they love about their culture. Modernity does affect them but they seem to still hook up with their tradition by still composing music with traditional taste and instruments––others might still busy with updating themselves alongside the western culture that is believed as the direction for a better lifestyle. It is relieving to met people who do music and arts without aiming for the glitters and gold, without doing it with any bad personalities like several top musicians before, and just sincerely doing what they love and not forgetting their obligatory as Indonesian to conserve the culture by producing music with traditional based instrument and rhyme/tone and mix it with modernity aspects in music. Whether they knew it or not, their attitudes and creativity positively have inspired many people before, including myself.

If there is one person to look up to for his/her sincerity on being loyal to someone, abdi dalem would be my personal role model. Abdi dalem is the people who serve the Sultan of Keraton Yogyakarta and his family. During our trip, we encountered two abdi dalem who work as kaprajan and punakawan. First impression of meeting those people was in a bit tense, as we know that they are the servants of Sultan, and we converged in Keraton so most of people would do any attempt to focus on being polite that lead each of us to feel uncomfortable and bumbling. But as the interview goes on, turns out they were not as I expected before as a very conservative, old-fashioned, and introvert people. Turns out they were very welcoming, gracious, and most importantly we had a pleasant talk.

One sentence stuck in my mind coming from Mas Mono––servant in administration branch and has served for quite long time in Keraton––is “Banyak disuruh-suruh, banyak tahu“, a single simple sentence that brought significant meaning to my life. Once I heard it, I completely understand how come they would be such faithful with their Sultan. Most people are spoiled enough to be asked for. Excuses coming all the way from the mouth just to neglect or reject their tasks and duty. Those abdi dalem had taught me to quit complaining much on little things that shouldn’t. Although the tasks was that hard to be accomplished, we just have to do it, because more or less there will be something to learned or known by doing that task. 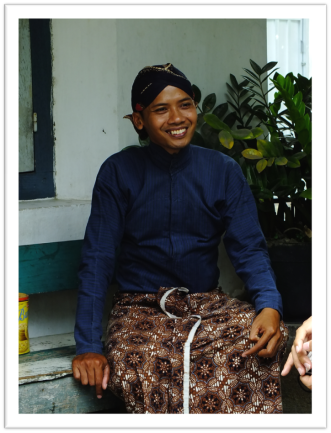 Guidance from those abdi dalem would help me to be more independent, less spoiled, never complain on little things, and start to making something whether its working for someone or making any creation because in the end I will get plenty skills once I’ve completed any tasks just like the abdi dalem, who sincerely doing their Sultans tasks and complete their duty because there is no expectation on any reward in return. Having an extra knowledge is a great reward for them after all.

Famous for their Yogyakarta classical dance and karawitan course, this studio is still located in Yogyakarta. Being well known for their high quality in teaching and performing Yogyakarta classical dance and karawitan since 1962 and has been performing worldwide. She is Ibu Siti Sutiah, a dancer and was one of the abdi dalem back then, the teacher of dancing lesson in this remarkable studio. She put her dedication towards dancing very high until dancing has become her life for many years. Seeing how passionate she does, encourage me to look and committed to my passion.

Ibu Siti Sutiah has been learning Yogyakarta classical dance since she was a little girl, when she saw a group of traditional dancer with her father. Story of how she found her passion inspired me to do so. She has been so committed with classical dancing for many years. Her dedication in loving this traditional dancing made her to keep on conserving this culture by teaching others.

No wonder that this traditional dance studio has gone worldwide and got plenty appreciation among the audience whom the majority are expatriates. She also stated that doing traditional dancing brings many positives impact to her life and taught her many lessons. In Yogyakarta classical dancing, the rhythm and moves are slower than any modern dancing type, because this taught us to be patient with fully dedication in learning process.

Kampung Salaman is located in Magelang, Central Java. I assumed how odd this place as I discover a bunch of people who is capable in graphic designing. Surprisingly, these people don’t have a proper education in graphic designing. Most of them work as a labor or farmer in the morning, but at night, they took someone’s order to design things like logo. Earning from designing is paid not only in rupiahs but also dollars. It is discovered that many foreign company has detected this potential and hire them as their designer undoubtedly.

Main difference I experienced between this destination with the other previously is when I interact with the children who are the student in this sanggar. The kids who become the students in this sanggar come from differ variety of ages between kids, teenagers, and even toddlers. The youngest participant in this class is a 2 year-old girl, and most of the student went to take this course when they were in the beginning of their early years of elementary school or kindergarten. Their willingness and commitment for traditional dancing is quit huge as I talk to some of the students back then.

I always love to see someone who does arts, and those kids over there are very inspiring with their full of spirits whenever they are about to dance. They love on traditional dancing reflected as they dance and through their commitment in doing it. Some of them admitted to start learning tari angguk because she aware of her tradition. She believes that it is her responsibility to conserve her culture in order to passes down the tradition to the next generation. The 10 year-old-girl had convinced me that in order to preserve our culture, we have to learn to love our culture beforehand, just like she does. It takes a huge commitment to do traditional dancing, and these kids have that spirits and willingness to do that wholeheartedly and with pleasures, while other grown ups seems doesn’t really care or even know what their culture really is.

Gerabah Kasongan is the perfect place to end my central Java wandering. This last destination is very exhilarating, as we are planned to do some handy craft at this place. Doing handy craft was never been enough amusement for me before. But at that time, I found everybody seems to enjoy crafting, making gerabah from a batch of clay and painting clay figures. I guess that after all we’ve been through and done in our hometown, which very well known of its modernity and urban lifestyle, all of us needed a break. Not just a break from our routine schedule, but every one of us need a break to be detached with the dependency of technology, like gadgets and other type of electronics. 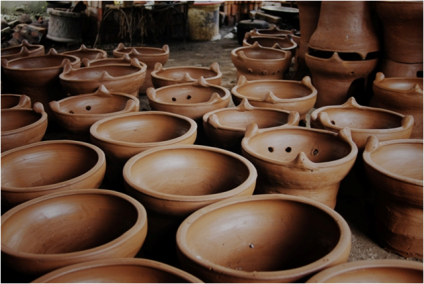 When doing handy craft with the clay, it brought back my childhood memories. The time when I used to regularly play outside of my house with my friends, riding a bicycle, put on my rollerblade, do a lot outdoor sports, or even just to play hide-and-seek in my backyard. Some activities that force us to make something, not just sitting and let the technology saves our daily activities. Making gerabah turns out to be very amusing unlike what I’ve expected before. It triggers our mind to be more creative, and keep thinking creatively.